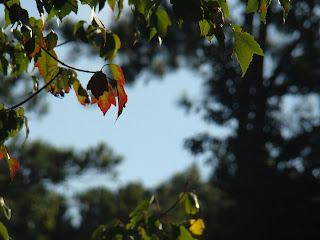 During the happiness of Spring a leaf emerges.
The sounds of the birds coax its little life to blossom.
It continues to bloom as the verve of the season buzzes around,
A leaf peeks further out to catch a glimpse.
The warming of the air draws its veins towards the sun.
It drinks in the liveliness that lands on its skin.
In the glow of Spring a leaf expands and settles with ease.
It sways with the breeze and dances in the rain.
The moisture invigorates it and gives it rest during dryness.
It thrives as a playground to the inhabitants of its home.
It observes as the bustling around it prepares.
It never knows where life is leading, or does it?
A leaf turns itself into the cool kisses of the wind.
The wind kisses it back bringing in the change ahead.
The night's settling chill draws the leaf in.
The relief of day begins begins to provide smaller comfort.
Day by day a leaf retreats further into the night.
A leaf depends less on the day to warm its shiver.
Retreated as far as it can go,
A leaf begins to create its own warmth.
It blushes in the sunlight and hides from the moon's deceiving light.
A leaf's blush becomes as rash with time.
The color warms a leaf more than the sun ever could.
A leaf begins to feel power in its hue and shines brighter than ever.
A leaf watched his brethren emit in the same way.
Their colors speak to each other and sing the sounds of Autumn.
Slowly the singing dies down, as does the scampering of life
Nature is beginning its rest, withdrawing its warming life.
The retreat spawns the gradual fervor silence.
A leaf's family leisurely succumbs to the lull.
The once bright accolades fade with the gaining gale.
While beholding such grand evolution,
A leaf fails to recognize its own advance.
The complexion that once inspired a leaf has drained it.
As it gazed upon the beauty of change around it,
A leaf has surrendered itself to its purpose.
Its blaze has begun to seethe through.
The bluster cause a leaf to withdraw from the sunlight more.
Its edges begin to curl in, wary of the fading comfort.
Bitterly, a leaf tries to assuage through its vibrance.
This last stand leaves it faded and listless.
A leaf welcomes the release that the breeze has to offer.
It chooses the whim, the euphoria,
The life that is being carried away on the breath of Fall.
The disengage leaves it soaring,
Beneath the beacon of light that has been its friend.
A leaf hang glides to the morphing tempo.
Whispering, swaying, drifting towards its rest.
Once snuggled against the kissing blades of grass,
It once again basks in the stagnant sun.
Seeking withering support, it rests without hindrance.
The excitement of its decent has left it tranquil.
At peace with its journey, a leaf concedes.
In the fading warming light of the season
A leaf accepts its fate and basks in the final rays.
Oblivious to the gusts of change around it
A leaf withers, and settles into the earth
With the help of an innocent step or lawn mower.
The pieces of the leaf settle in
To the last that warmth the icy ground has to offer.
Hibernation warms a leaf as it resurfaces with the warming of Spring.
Yet a leaf does not evolve whole,
Does not present itself as it was.
A leaf thrives through the life of the coming season.
It fuels the vibrance of the revolution.
The radiance it once showed
Flows through the veins of a new bud,
A new leaf,
A new life,

- To my son Trey, your will forever evolve with the cycle of our lives
Posted by mysharona76 at 9:14 PM