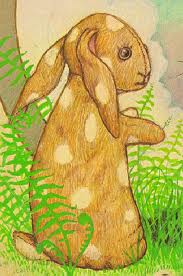 During the last full week of school with my first grade students I was reading The Velveteen Rabbit which depicts the "life" of a  briefly unloved stuffed rabbit who soon became a little boy's favorite toy.  Upon meeting "Real" rabbits, he learned that he was not "real" and would never live like they did.  Saddened he talked to the old rocking horse in the nursery who explained to him that  he could INDEED become real by way of the magic the love the little boy gave him which would make him "Real".  The boy became sick and some of the toys in the nursery had to be disposed of, including the beloved rabbit.

The adults gave him a new rabbit and even the boy believed that would sooth the sadness of losing his beloved rabbit friend.  By the end of the book, the boy did indeed love the Velveteen Rabbit more than enough to make him real, allowing the magic of love to turn him "real" and let him live amongst the other rabbits.  I won't spoil the ending, but it was heart warming and I think it was the part that touched me the most.

As I finished the book to my students, I had to save face and hold back the rush of tears that wanted to spill from every pore from my body.  We we share a book together we always talk about connections we can make to the book, be it ourselves, another book or our world.  I always share the connections I make to be a good example and model  to the students.  I shared my world and text connection, then, as I tried to transition to the next activity, one of my students reminded me that I had not share my text to self connection.  As the tears pooled I scraped up the connection that I believed of love, and that just because something does not SEEM real, our love for that object carried the magic of real-ness in our hearts.

I got through the day but found myself reflecting on connections I could make to the book, there were too many to count.

First, I though of the unknown love the boy originally felt for the boy.I remember not comprehending the love one could feel for their child(ren).  As the boy became to love the rabbit with all of his being, I was reminded of the idea of having a son that was growing in my body, the love, a love I had never fathomed, grew inside me as well.  I never imagined my life without him.

When he became "Real" too us a little too early on March 23, 2009 and we were forced to give him up, just as the boy did the Velveteen Rabbit, the magic of love that we gave him made him Real, even if in our hearts.

Though we went on to have another "rabbit" of our own, our first beloved child has always been and always be REAL to us.  He lives in our hearts, watches us from Heaven, is missing from our lives, haunts our future, blesses our memories.

In the book, the live rabbits did not believe the stuffed rabbit was real because he did not move, live, eat, look, or talk like them.  Likewise, no one outside of the nursery toys believed in becoming real.  As the reader I connected with that concept, it's hard for people who are not baby loss parents or don't have to cope with children who aren't "real" here on Earth can't fathom the magic of making something that seemingly no longer exists "real".

But those of us who identify with the nursery toys KNOW that once you love something so much with all of your being and it becomes Real, it never stops being Real, no matter how we move forward.  I miss my little "rabbit" so much it hurts, but at the end of the book, hope springs eternal as it always does.  Again, i won't spoil it, but i would love to hear the reflections of others.

- Except from The Velveteen Rabbit

"What is REAL?" asked the Rabbit one day, when they were lying side by side near the nursery fender, before Nana came to tidy the room. "Does it mean having things that buzz inside you and a stick-out handle?"

"Real isn't how you are made," said the Skin Horse. "It's a thing that happens to you. When a child loves you for a long, long time, not just to play with, but REALLY loves you, then you become Real."

"Does it hurt?" asked the Rabbit.

"Sometimes," said the Skin Horse, for he was always truthful. "When you are Real you don't mind being hurt."

"Does it happen all at once, like being wound up," he asked, "or bit by bit?"

"It doesn't happen all at once," said the Skin Horse. "You become. It takes a long time. That's why it doesn't happen often to people who break easily, or have sharp edges, or who have to be carefully kept. Generally, by the time you are Real, most of your hair has been loved off, and your eyes drop out and you get loose in the joints and very shabby. But these things don't matter at all, because once you are Real you can't be ugly, except to people who don't understand."
"I suppose you are real?" said the Rabbit. And then he wished he had not said it, for he thought the Skin Horse might be sensitive.

But the Skin Horse only smiled.