The Sins of the Mother 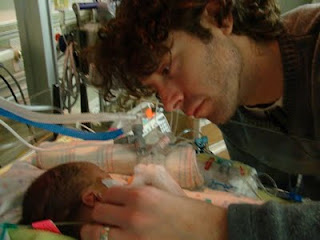 Last weekend I was all set to write about my first week back at work and Lorelei's first days at daycare (which incidentally went well, no tears from me and she loves her babysitter) when I was hit with a bombshell. John and I were talking about the difference between having our two children.  Obviously our rainbow baby is home with us and Trey never came home so life with her is WAY different than our life without Trey.

We got to talking about the day we signed the papers for Trey's life support to be turned off.  I remember that day so well.  We were both standing at the window of his NICU private room and the view couldn't be worse, the roof of the adjacent building with all its glorious scenery.  I remember asking him if he wanted to be present when Trey passed on and he asked me the same question.  I replied that I did not want to watch my son die and to that he said that his place was with me.  We left, but waited down in the lobby for his mom to come, but she never did.  We left at 5:30, the time designated time the machines were to turn off and Trey would begin losing his life.  I was worried that he would be alone when he died and felt extreme guilt about leaving him to die alone.  We got home and waited for the call from Trey's doctors that he had passed but we were pleasantly surprised when the phone rang and my dad was on the other end.  He told us that Trey passed peacefully and that John's dad, step mom, my parents, and my aunt had stayed with him until he passed.  I was so thankful he was not alone, yet the guilt of not holding his hand as he grew his wings will forever haunt me.

In discussions that came later, my husband would tell me that he didn't want to be there when Trey died because he had watched him "die" (code) numerous times the night he was born as the doctors tried to get him stable, which my husband never actually told me the number of times that happened.  Little did we know, the hour and a half they spent trying to get him stable would end up killing him.

That brings me to last weekend when John told me he actually wanted to be there when Trey died.

My heart dropped, the tears poured out, and the guilt mounted.

I know it was his choice to take care of me and be with me during this difficult time.  That speaks volumes abut the kind of wonderful husband he is.  But I couldn't help but feel that if I had been little less of a coward, afraid to see my son die, my son would've had his daddy with him when he journeyed to Heaven.  I feel like I deprived my son of that by making John feel that he had to be with me instead of where he truly wanted to be.  I could've handled it if he had told me his heart's true desire to stay with Trey.  I would've encouraged him to be there, I would've waited for him in the lobby.  It would've brought me peace to know he was there with his son.

This bombshell shadowed my weekend in tears and heartache.  I apologized to Trey and my husband profusely but my heart still remains heavy with this knowledge.

My husband is an amazing man who showed the ultimate sacrifice in letting his son go and leaving with his distraught wife instead of staying to say good-bye to his baby as he died.  Honestly, I feel like the crappiest wife ever for letting him do that.  I know him well enough to know that sometimes in emotional situations, he doesn't give me the real answer right away, he gives me the tough guy answer and later on I get the real answer.  I should've asked him again, or asked him if he was sure, maybe I did, but I didn't push hard enough.

God bless him for what he did and I hope Trey can forgive me for taking his daddy away from him in his ultimate hour of need.
Posted by mysharona76 at 4:53 PM