Snowed into a corner 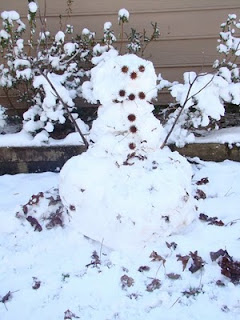 Last Sunday, Georgia watched in awe as Mother Nature dumped a blanket, make that a mattress, of snow across the state.  5 days later, we are finally starting a relevant thaw out and getting back to life as usual.  In the process, most counties closed schools for the week and many businesses were delayed or closed due to hazardous conditions on the roads.  This included some healthcare facilities, specifically mine, causing me to have to cancel my first OB appointment on Wednesday.

I was actually looking forward to this appointment, as it was the jumping point from which my records would be reviewed, Ob care would continue where it left off, and perinatal referrals would be made.  Ever since we switched insurance companies at the beginning of 2011, I have been anxiously awaiting this first appointment, as it ensured the continuation of the extensive care the baby and I were receiving before the new year.  Canceling the appointment was no big deal, the facility was closed and the drive too dangerous.  Upon rescheduling, the closest appointment was nearly two weeks after my initial appointment.  The appointment was scheduled much to my dissatisfaction and anxiety.  The date of the appointment would mark over a month since I had last seen a doctor and I was much less than comfortable with that.

Before the new year, I didn't go two weeks without seeing a doctor, even for the short time between the beginning of my care and the new year.  A whole month was absolute torture, as I wouldn't get to see/hear the baby or get confirmation that everything was going smoothly until over a month after my last appointment. My husband and I maintained our sanity thanks to continuous input from frequent appointments and were expecting the same care with our new doctors.

After a bit of an emotional breakdown, I gave myself a night to sleep on it and calm down enough to think my feelings through.  After a horrible night's sleep, I came up with two conclusions.  1. After all that we have been through, I have every reason to be on edge concerning my healthcare and insist on immediate care.  2. As a new patient to both the facility and the insurance company, they have no idea how high risk this pregnancy is, nor do they know my health history.  I had no idea what medical records had actually gotten to them even though they were sent to them before the new year.  So, under the advise of a very good friend inside the insurance company, I called the insurance company again and, trying to keep as much composure as I could muster (which wasn't much), I explained to the advise nurse my concerns about the delayed appointment and gave her a brief history of my last pregnancy.  I assured her that I wasn't trying to be a pain or a neurotic pregnant lady, just a Mommy who has been through the worst and wants the most immediate care possible.  She patiently took notes and suggested a consult with an OB the next day to review medical history and set up any perinatal referrals necessary.  I happily agreed and apologized for my emotionality.  To that, she assured that it was a good idea to call in and she would have done the same thing if it were her.  EXHALE!!!!

During the consult the next day, after the doctor cleared a confused nurse out of the room,  (she wasn't quite why I was there if not to get regular OB check-ups done) the OB and I discussed Trey's condition and birth as well as my maternity care up to this point with this pregnancy.  She wondered out loud why I had not been seen earlier.  As I suspected, all of my records had not been received yet, most likely still in the offices of the perinatal doc to whom they had been sent.  From the records that she received, she agreed that this pregnancy should continue to be treated as high risk and the perinatal referral needed to be made immediately so that I could continue to be under the care of both an OB and perinatal specialist.  Then, it was as if she read my mind, she got out the Doppler device to listen to the baby's heartbeat.  It took her a few moments to find the heartbeat, during which time I am pretty sure I did not take a breath.  After a few moments of wrestling the wiggly 4 inch long baby inside me, she was able to zone in on the heartbeat.  I listened with delight and relief to the music that was our baby's heartbeat.  EXHALE!!!!!! (and smile REALLY REALLY BIG!!!).  The appointment ended with her thanking me for coming in to consult with her and assuring me that both the OB and the perinatal offices work closely together concerning patient care.  I thanked her for taking time with me and I was again validated for calling in to make the appointment when she told me that after all that I just told her, she didn't blame me for wanting immediate care.  EXHALE!!!

I must say that I am more than pleased with how my treatment has started out.  I am glad that I acted as an advocate for my health and the health of my baby.  The way I went about it was respectful and dignified.  So often, I have just accepted and trusted how my healthcare was being handled, stifling my real feelings and concerns, but after all we went through with our son and our last pregnancy, I can no longer sit back and let what I feel is in the best interest remain silent.  I feel empowered by my recent experience to encourage everyone to be an advocate for their own health and the health of their loved ones.  It worked to my advantage this time, and even though I might not get what I want every time, I know that by asking questions and seeking information I am educating myself which is another way of being one's own advocate.  Being "snowed into a corner" forced me to find my voice and respectfully ask for what I know the baby and I needed instead of simply accepting the appointment given to me and the distress it would cause me.  The end result, peace of mind and quality care, definitely worth the life lesson.  EXHALE!!!!!
Posted by mysharona76 at 4:10 PM

Email ThisBlogThis!Share to TwitterShare to FacebookShare to Pinterest
Labels: By Trey's Mommy, Pregnancy After Loss