The Beginning, a very good place to start

It's been a long road for John and I to have another baby, not as long as others, but long enough for us.  We spent nearly a year trying for a baby.  Lots of folks say that if you just relax you'll get pregnant, I would like some scientific proof on that one.  Both of our pregnancies are the results of careful planning, timely approaches, attention to every detail, and an obvious amount of pressure on both of us.  There are people that can get pregnant just like that, WE are not those people.  We have to follow the schedules, take the vitamins, plan our "get togethers", elevate my feet, bicycle, take my temperature, pee into fetility calculators, and, dare I say it, look out for the dreaded discharge (EWWWW).  Kudos to those who are lucky in fertility, but the rest of us have to work a little harder and we don't want to hear that we need to relax.  That is the last thing we are able to when juggling every possible strategy of conceiving a baby.

But like I was saying, after nearly a year of trying for a baby, our OBGYN Specialist told us that there was nothing more he could do and he referred us to a fertility specialist.  Needless to say I cried for a week!  We both knew that this step in our fertility treatment was going to start to get expensive.  A silver lining showed itself when our insurance company told us that diagnostics and office visits to the fertility specialist were covered 100%.  I went in with the attitude that they would perform some tests, find a minor problem and we would be on our way.  I readied myself to hear EVERYTHING the doctor had to say, surrounded by a new partner and two interns.  My eyes glazed over when he said $3000-$4000 a month with a 20 % success rate.  I wished then an there that my husband was there to hear everything else the doctor said because at that point I had checked out.  I caught glimpses of his speech like daily shots in my a fatty areas (pick a spot, no REALLY!) and something about John having to make love to a Tupperware container (I thought this was quite a flippant way of explaining that John would have to give a sperm sample twice a month).   The icing on the cake was that we had already exhausted the diagnostics that would have been free under our insurance. After what seemed like hours, I left the office numb and finally broke down in sobs as I called my husband to relay what little I had allowed myself to hear.

The water works resumed for another week, yet in the course of that week I was able to email the nurse with a long list of questions I had after the fact.  After two weeks of email and phone tag, she finally responded.  What was I being treated for?  Some condition that was a million letters long and impossible to pronounce.  How many weeks would I have to take the shots?  Throughout the first trimester.  With every question that was answered (there were ten all together) our decision on what step to take next became clearer and clearer.  John was against the torture that my body would go through during this procedure, so his answer was no treatment.  That cemented my decision, a firmer no.  Fertility treatment is a relatively newer technology and I was not so sure about the side effects and consequences of using the variety of injected chemicals that would be required.  How would they effect me, both presently and in the future?  What would they do to our unborn baby?  It was also our belief that babies ought to be created biologically rather than at the hands of chemists.  Others have a different belief and are able to endure and pay for the procedures that will lead to conception, that is their right and their choice.  In our minds, if it were meant to happen naturally, then maybe it wasn't meant to be.

So what was next for the Chathams?  We still wanted kids, we just knew we would have to go at it a different day.  We began prepping ourselves for the adoption process in early 2011.  We also turned our backs on western fertility methods and researched eastern practices such as Dong Quo and acupuncture.  Taking these steps forward took a lot of pressure off of me and gave me something to look forward to rather than a rocky road to continue traveling on.

Fast forward to the day that I am two weeks late, not a big surprise for us ladies whose cycles show up whenever they please.  I followed the ritual of taking the pregnancy test just knowing that it would be negative.  I wasn't even going to look at it until after I piddled around the kitchen doing a few things to get ready for the day.  Well, I HAD to look at it when I accidentally knocked it on the floor when leaving the bathroom.  And what to my wondering eyes did a appear?  Two pink lines, and they were VERY clear!  I grabbed the test and ran up the stairs to our bedroom, panting a chosen cuss word in the process and for the second time, John found out that his wife was pregnant while he was in the shower.  John repeated his performance from the first time around insisting that I take another test tomorrow.  He cautioned me not to get too excited yet (NOT A CHANCE IN HELL!).  Before I left for work, he called me "Preggo", kissed my belly, and reminded me to make an appointment with the doctor.  With that, the next leg in our journey had begun.

It was amazing to us that after all of the bad news we had heard, we were pregnant all along.  We were reminded of when we were trying to sell our condo and the stager had us buy all of this furniture, but before the furniture even got there, we had a contract on the house.  So much for $5000 worth of furniture, or for that matter, $3000-$4000 a month in fertility treatments.  Nevertheless, our fears of never having another pregnancy were put to rest, giving us much needed peace after nearly a year of uncertainty.  We both looked to the heavens thanking God, but also thanking our son Trey.  We know in our hearts that our dear son had a little something to do with our miracle pregnancy, and it gave us comfort to think that he hand picked the soul that inhabits the growing fetus inside me. 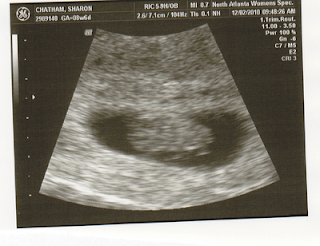 Email ThisBlogThis!Share to TwitterShare to FacebookShare to Pinterest
Labels: By Trey's Mommy, Pregnancy After Loss